All Is Well Multispecialty Hospital is an integrated healthcare service provider. We offer excellence in inpatient and outpatient facilities focusing on the comfort and safety of our patients and their loved ones. 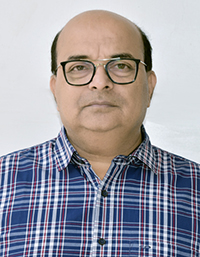 Anand Prakash Chouksey is a well-known educationist with a meteoric success record in the Burhanpur district in the areas of education and extending to healthcare. He started his career as a teacher and today he is the owner and creator of a successful chain of educational institutions with high-class residential schools and a state of the art high-quality Multispecialty Hospital (ALL IS WELL). It is said that success is never an accident, Anandji himself faced the hardships of poverty in his young days while serving as a Milkman but he had the courage to initiate the redefining of education in the region of Burhanpur. His down to earth approach towards everything in life brought extraordinary successes with Macro Vision Academy, Burhanpur, as the first Apple Distinguished School in India and Asia-wide and being featured in Forbes List of Best Schools in India.

Anandji brings his 30 years of experience to the panel with his progressive mindset on how youth and education can revolutionize India in the coming years. His lectures and speeches are versatile, apolitical, forward-looking and development driven. Recently, Tim Cook, the CEO of Apple invited Anandji as the lead speaker on matters of Technologies’ Use in Education in 2016, London Apple Education Summit to guide other schools on the introduction and management of iPads and iMacs in Schools. On the social and philanthropic front, Anandji also leads the Kalchuri Samaj in the Madhya Pradesh region and has received the highest recognition time and again from Dainik Bhaskar, Art of Living, Gurudwara and Local Madrasas. In 2012, he was also felicitated with Shiksha Bharati Puruskar at All India Achiever’s Foundation of New Delhi. Despite all achievements, the man remains humble and continues to work towards the betterment of the Burhanpur region.

24 X 7 including all Regional, National and International holidays.

All is Well Hospital